Yesterday I did something most of you will probably consider insane (I know my wife did). A brand new Apple Store was opening up in Fayette Mall here in my home town of Lexington, KY. Since I have been waiting to purchase a new iPhone for myself and my wife, I decided to get up extra early and get in line to ensure that I could pick up a couple of phones (the free commemorative t-shirt was a nice incentive as well). But I have to be honest, there was something in me that also wanted to experience the grand opening of the store. As a borderline Apple fanboy, I follow the going ons of Apple and have read about the exciting and energetic openings at other locations. So even though the main purpose was to get iPhones, I was excited to just go and experience the atmosphere.

I arrived at the mall at 6:00am and found myself number 16 in line. The first person in line had showed up at 6:30pm the evening before (now that’s dedicated). I quickly made some friends with the people in front of me and we chatted off an on while we sat in chairs the mall had put out for the first 20 people in line. We were able to leave the line as we wished and people respected your spot. The time actually passed by fairly quickly. I brought a book to read. UK Basketball was discussed. It was fun. As time neared the store opening, more and more Apple employees began arriving and mingling along the line, talking to people about why there were there or what product they hoped to buy. As the time for opening came, all the employees began chanting inside the store and they suddenly streamed out of the store and high-fived everyone in line. They were excited. Once they were all back inside the store, the store manager came out and gave a little speech. He asked if Lexington was ready for the Apple Store. We all shouted loudly that we were ready. He then asked the Apple Store employees if they were ready for Lexington and they enthusiastically shouted that they were likewise ready. And after that, they let the line start streaming into the store. We were greeted with high-fives and raucous applause and shouting by all the Apple Store employees. After making my way through all the employees, I headed towards the iPhones, were I was promptly greeted by Kyle who helped me secure two new iPhone 4s, along with some other accessories. I was out the door in 15 minutes, a satisfied Apple customer.

So why did I just share this little story with you? Because our culture would have us believe that there is no over-arching grand story of which we all share in. And because Apple proves to us that even though our culture says it believes the metanarrative is dead, it cannot help but seek out a part within one.

Jean-François Lyotard, a 20th century french philosopher, coined the term “metanarrative”. It refers to a system of thought that seeks to give a comprehensive meaning to history, society, and culture by appealing to universal truths. The Bible is a metanarrative. It provides a way of thinking about the world that is rooted in truths that are absolute for every single person who has ever lived or will ever live. Lyotard saw metanarratives as part and parcel of the modernist movement. He went on to also introduced the term “postmodernism” to the realm of philosophy, which was a way of thinking that rejected metanarratives (hence, it is post-modern). There are no absolute or universal truths. Truth is whatever you desire. Truth is relative and malleable and flexible. But postmodernism has a problem. No one lives this way and no one wants their neighbor to live this way either. 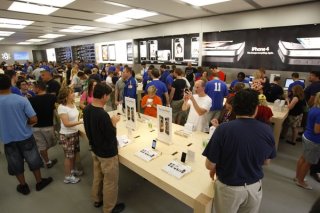 And what I see in Apple in this little experience I had, is that the idea of a metanarrative is still very much alive and well. As I listened to the people in line talk with the different Apple employees, I got a sense that many of them were simply there for the experience. A few people were there to get an iPhone or iPad (which have been in short supply since their launch earlier this summer), but the majority of the people in line around me just wanted to be apart of the grand opening. I myself thought this would be a cool experience (and it was), but if I already had what I needed, I certainly would not of waited in line for 4 hours just get high-fives and black Apple t-shirt. Yet, there were several there for what seemed like solely that purpose. But I would propose to you that one of the reasons several hundred people came that morning to the opening of the new Apple store was because it was an opportunity to be apart of something bigger than themselves. Apple provides that opportunity. Buy their products and you’re apart of this global family of Mac users. Speak the language of Macs and iPhones and you can make instant friends. Being apart of the Apple community means something. Just ask the guy at the front of the line wearing his “I left my heart in Cupertino” t-shirt.

But why do we seek this? What draws us to reject the Me of postmodernism for a smaller role in larger story than we could never create by ourselves? Why do we go to the Grand Canyon or Niagara Falls to feel small? Why do we stare at the stars in silence? Why do we passionately defend our chosen story in the comment section of blogs? I would suggest that something ancient within us compels us to seek a larger story. Even when we consciously state that “I am the captain of my soul”, we blindly act in ways that give ourselves away to another captain. We are simply acting out the etching of our heart. You see, we were created for this. That great Preacher from the past stated that God “has put eternity into man’s heart…” Postmodernism cannot account for this inner-drive toward community. But the Bible can. The real question is not “Is there a metanarrative that rules the world?”, but “Which metanarrative is the right one?” I believe it is only the Bible that can account for the totality of man. Only the Bible can account for what we find in our world. It is the only metanarrative that can account for it all.

I think the one thing that really struck me from my whole experience at the Apple store was before we entered the store, the employees began chanting “We are Apple”. We. Are. Apple. The metanarrative lives on indeed.

View all posts by Justin